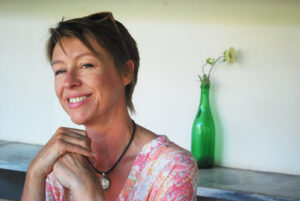 POPPY ALEXANDER wrote her first book when she was five. There was a long gap in her writing career and – after studying classical music at university – she decided the world of music was better off without her and took up writing again. However, she quickly discovered making things up is frowned upon when writing feature articles and press releases and it finally dawned on her she was better suited to writing novels.

Poppy adores creating uplifting, romantic fiction with strong, multigenerational friendships and idyllic country settings. She takes an anthropological interest in family, friends and life in her West Sussex village (think, The Archers crossed with Twin Peaks) where she lives with her husband, children and various other pets.

Poppy’s first book – 25 Days ‘Til Christmas – has been translated into several languages and optioned for Film/TV. Her latest book, Storybook Cottage, will be published in 2024.

She is frequently to be found lurking on social media as @PoppyAlexanderBooks.