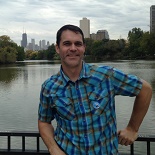 GAVIN VAN HORN works at the Center for Humans and Nature. He is the co-editor of City Creatures: Animal Encounters in the Chicago Wilderness (2015) and Wildness: Relations of People and Place (March 2017). He writes for, edits, and curates the City Creatures Blog and his creative nonfiction has appeared in Orion, Red Savina Review, and Zoomorphic, among others. He lives in Chicagoland.