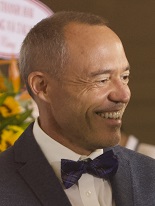 JAMES D. SCURLOCK is a Seattle native and Wharton School dropout. In 2006, he directed the documentary, Maxed Out, an expose of predatory lending in America that was released by Magnolia Pictures and Netflix one year before the global financial crisis exposed the deep fissures of an industry run amok. He is also the author of the books, Maxed Out: Hard Times in the Age of Easy Credit (Scribner, HarperCollins);  and King Larry: The Life & Ruins of a Billionaire Genius (Scribner) and the producer of several documentaries, including Parents of the Year/Padres del Ano (HBO). James lives in Winter Park, Florida and Ho Chi Minh City, Vietnam, where he is working on a miniseries based on King Larry with Vy Vincent Ngo (Hancock) and Russell Williams of Early Risers Media. He is also the publisher of The Intelligent Newsletter on Substack and shares life with his partner of ten years and a Shiba Inu named Candy.