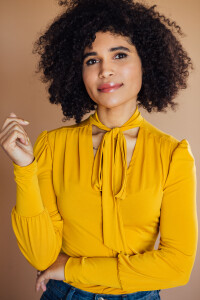 KIRYA TRABER is originally from Northern California, and now resides in Brooklyn, NY. She is a collaborating artist with Ping Chong + Company, and is New York Stage and Film’s 2020 Founders Award recipient. From 2015-2020 she was Lincoln Center’s lead Community Artist in Residence. She is the recipient of a NY Emmy Nomination (First Person PBS), Robert Redford’s Sundance Foundation award for Activism in the Arts, a California Governor’s Award for Excellence in the Arts, and an Astrea Lesbian Writers Fund award for Poetry. She has been a commissioned artist of notable New York arts institutions such as the New York Philharmonic, the Morgan Library & Museum, the Orchestra of St Luke’s, and La Mama Experimental Theatre Club, among others. Throughout her ambitious performance and writing career, Kirya has continuously utilized her art for social change as a cultural organizer. Her debut young adult novel will release from Dutton/Penguin Random House in 2023.