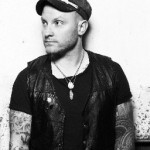 ROB RUFUS is a musician and writer living in Nashville. His band, the Blacklist Royals (http://www.blacklistroyals.com), has released two full-length albums and three EPs, all of which have received overwhelming critical acclaim.  They have had songs featured on major television shows such as Sons of Anarchy, Gotham, and Shameless, and recently had a cameo on the hit ABC prime-time series Forever.

Rob’s memoir DIE YOUNG WITH ME, an intimate account of his battle with cancer in his teens, will be released by Touchstone in 2017. Rob also writes articles for Modern Drummer, Amp magazine, Digital Tour Bus, VICE, and various other music sites and blogs.

Rob also works closely with the cancer community, including the Lance Armstrong Foundation, Gilda’s Club, I’m Too Young For This, Stupid Cancer Podcast, Shirts For A Cure, and Make-A-Wish Foundation.