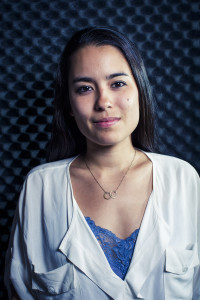 ALEXANDRA LEIGH YOUNG was born with a Top 40 song stuck in her head. Her first two cassette tapes were Janet Jackson’s Control and Queen’s Greatest Hits. Her pop-music dreams came true in college when she got a gig in concert production and went on tour with Third Eye Blind, The New Kids on the Block, Nick Lachey, and many more. After graduating from UC Berkeley, she moved to New York City where she ran an audio post-production house called Explosion Robinson. While there, she produced music and sound design for TV shows and video games like Ru Paul’s Drag Race, and Dance Central. In 2015, she was awarded an artist residency in South Korea, where she fell in love with a new kind of music: K-pop. After a year of reporting on South Korea’s music industry, she returned to the US and produced her debut podcast episode for Radiolab, called “K-poparazzi.” Today, she continues to report and produce podcasts for The New York Times’ #1-ranked news podcast, The Daily.  Her debut young adult novel Idol Gossip, set in the world of K-pop, will release from Walker US/Candlewick in fall 2021.