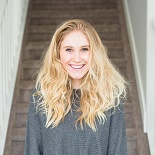 SOPHIE GRAY is the founder of DiveThru and a prominent voice in the wellness space. At the age of 18, Sophie grew her audience to more than 500,000 people across the world. The mental health experiences she faced {self-harm, attempted suicide, panic attacks and a disordered relationship with food} set her on a journey of self-discovery and growth. She now shares the insight she gathered through her personal channels in an honest and humorous way. She also founded and launched DiveThru, an app combining the power of mindfulness and journaling, in 2018 as a way to further share her message.

Sophie has been named Greatist’s 100 Most Influential People in Health & Wellness three years in a row. Her work has been featured in Cosmopolitan, People, Women’s Health, Refinery29, Marie Claire, Yahoo, Shape, Self, and many more.  Her conversational writing style will be captured in her first book with publisher Penguin Random House.